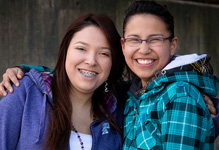 Rural youth learn about
careers, together

Children Rising. It’s a fitting name for a career exploration program originally designed for young people living on Skownan First Nation, given the enormous challenges they have to overcome.

Youth from this reserve nearly 400 kilometres north-west of Winnipeg (population less than 700) – along with kids from seven surrounding communities – get a chance to explore dozens of careers at post-secondary institutions in Winnipeg during three annual weekend excursions.

“This project is about young people rising above their current situation and progressing and improving and bettering themselves,” says Director of Children Rising, Fairy Wong, noting the program expanded to include youth from Camperville, Duck Bay, Gypsumville, Pine Creek, Rorketon, Waterhen, Winnipegosis, and more recently the Pembina Trails School Division in Winnipeg.

The young people who call Skownan First Nation home live in relative isolation and have virtually no other educational or recreational programs available to them. According to school records, less than 10 percent of teens from this community graduate from high school.

One of the reasons Career Trek now includes kids from Skownan’s neighbouring communities is to hopefully reduce the high school dropout rate. Skownan students must travel one hour to adjacent rural communities to attend high school and the transition can be tough. Career Trek gets the kids and their parents forging friendships early on, with the belief that building positive relationships between communities will lead to more positive high-school experiences for everyone.

Agnes Contois, an Educational Assistant at Skownan School who hasn’t missed a Career Trek activity since its local inception in 2004, says most of the kids have never left the reserve and explored what lies beyond their community. “That’s our greatest challenge. They don’t see the bigger world or what’s out there for them.” 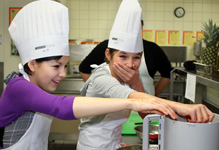 Career Trek participant Sheena Catcheway, 14, says the resulting boredom causes youth to get into trouble with alcohol, drugs or crime. The Grade 8 student wants to be a pediatric nurse and set a good example for her baby nephew, born to her 17-year-old brother.

Career Trek provides her with options. Sheena says, “It shows me where I can go, what I could be. I have choices to make.” And if she decides to go to university, stepping foot on a campus of nearly 30,000 students will likely be less intimidating now that she has already walked its halls.

Fairy praised Sheena’s commitment. “She is just a resilient kid. When you consider the odds stacked against her but still she comes to the program, smiling through it all.” There’s no question Career Trek has brought about improvements in the lives of Skownan youth, Agnes adds. But the idea of institutionalized learning can still carry a stigma for locals who were sent away and forced into residential schools as kids, only to be abused by authority figures.

A residential school survivor herself, Agnes believes it’s crucial the community move forward. “We can’t just be stuck in that era. We have to keep moving. There are a lot of people in this community who are capable of making those changes.”

There are parents who have embraced the program and even decided to head back to school themselves.

One mother, a school custodian, hit the books and is working towards her Grade 12 diploma.

Other parents – particularly the younger ones – have gained some insight into what they want to do with the rest of their lives. Fairy says, “These are tiny little steps but for me that’s a huge success. It’s turning a light on for some of these adults who wouldn’t have had a chance to learn about these things otherwise.” 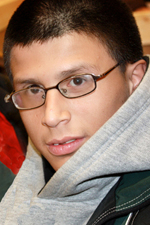 Johnathon Genaille hopes to be the first in his family to go to college.

Johnathon Genaille, 16, says three years of Career Trek helped him realize he wants to be a car mechanic. He says the program has also shown him how to be a good role model and introduced him to new friends from other communities. “It’s awesome,” he says.

The program builds confidence by not only exploring career options in Winnipeg but opportunities in the participants’ own backyard. Skownan youth can hunt, fish, or work in the band office, local school and health centre.

Career Trek has six sub-projects for kids in this region, including one that has them teaching their mentors a thing or two – like how to repair a snowmobile or check the trapline for muskrats.

“You could see the pride in our kids when they were showing them what they can do,” says Agnes, noting there have been significant, positive changes in the students since Career Trek’s arrival. She is now seeing the first of the Career Trek participants graduate and make plans for university. “The kids are happier, more confident, more proud of their culture,” she says. 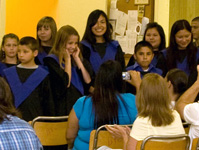 Completing a Career Trek program is a huge accomplishment and worth celebrating.

Although the younger participants of the eight-year Children Rising (Apinochek Pasaquok) program may not be graduating yet we still like to acknowledge the end of the year with a celebration of sorts. Career Trek held a ceremony in Winnipegosis to recognize the participants’ commitment.

“The kids and parents were so excited,” says Program Manager Fairy Wong, “and it was touching to see some of the parents hold back tears.”

The Children Rising Program is funded by: