Georgina Hnatiuk was worried that her son and daughter would fall through the cracks of life, that their unique way of learning might be overlooked or underappreciated.

When I first saw Georgina her eyes were watering and she was thanking Darrell Cole.  She was at the convocation ceremony for her daughter Zarah Hnatiuk, who had just graduated from Career Trek’s Wonder of Work Winnipeg program.

“I didn’t expect myself to be that overwhelmed about it but it is a very emotional and impactful experience,” says Georgina.

Georgina was moved by the philosophy that underpins all Career Trek programming: the belief that every child is exceptional and has something to contribute.

“Every child is a genius,” says Darrel Cole, CEO and Founder of Career Trek.  “We have to learn as adults to liberate them.”

According to Darrell, genius comes in different sizes and shapes and sometimes it’s not visible, but every child has it, every child is extraordinary.

“All of these young people have demonstrated over the course of the year the ability to be more than ordinary,” said Darrell in his graduation address.  “They’ve made incredible sacrifices, they’ve taken risks, they’ve demonstrated curiosity, and they are here today because they are amazing.” 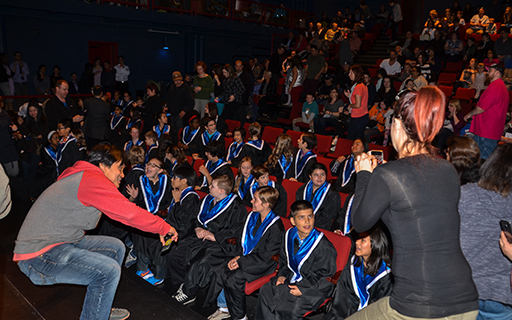 The 2015-16 Career Trek season saw 543 amazing kids graduate from six different programs in four regions of Manitoba.  Each participant was given the opportunity to explore multiple careers at post-secondary institutions like the University of Manitoba, Assiniboine Community College, and University College of the North, among others.

In addition to career awareness, the kids increase their skills, gain a sense of empowerment, and a new sense of self-awareness that leads to increased engagement with school and a commitment to thinking about and planning their futures.

According to Georgina, the number one thing kids get from Career Trek is confidence.  She says there’s ultimate engagement and a feeling of pride being immersed in a program they were chosen for and accepted into.

“Having a hands-on learning experience at the university and going through all of those various programs, it’s really awakening and there’s so much energy and pizzazz they get from it,” says Georgina.

When I saw Georgina outside the graduation theatre she had this to say, “they learn what they are interested in and what they’re not interested in.  It’s really life changing.”

At the close of the season, Career Trek congratulates all 543 kids, youth, and young adults from our six programs who worked hard and used their own unique way of learning to prove that they are more than ordinary.

“Career Trek graduates have what it takes to travel the road to success,” says Darryl Gervais.  “I’m here on behalf of Manitoba Advanced Education and Training, our new Minister the Honourable Ian Wishert, Premier Pallister and his colleges in the legislature.”

“Success takes courage, commitment, and hard work.  You have the courage to dream, the commitment to realize your dream, and the hard work of being in school planning for post-secondary education and a better tomorrow.”

“It’s our job to continue to unlock their [participants] potential because when we do, not only will they be successful our community will be successful.  So on behalf of everyone, I would like to congratulate you on being exceptional young people and we’re delighted to sit back today and celebrate the start of this journey.”

“By the end of the program I feel more like myself and am more comfortable in social situations.  I have faith in new people, I see more positivity and hope in the world because of the people I’ve met and the things that I’ve learned.  I feel like they taught me my life is not over.  Some people think when you have a child at a young age that’s it for you, but that’s not true.  It’s never too late to start your life.  They also showed we are worth something, we matter, and if we try we can make a difference.”

“Career Trek has a great impact on kids because you would know exactly what you want to pursue.  In life, most kids don’t know what they want to pursue if they have an idea of what they can do it’s just like straight going to high school, get these subjects, and to to university. Opportunity opens up.”