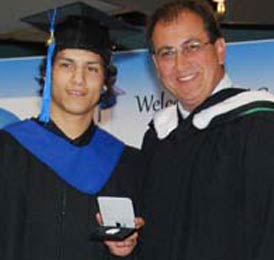 Career Trek junior staffer River Phoenix Lathlin was surprised that he was chosen for the prestigious Lieutenant Governor’s Silver Medal in Trades. But his welding instructor Monty Morrisseau certainly wasn’t.

Monty says 21-year-old River excels in anything he puts his mind to. Not only is River a skilled welder, his commitment to helping young people in the Opaskwayak Cree Nation where he lives is remarkable.

“Whatever he decides to do, he can achieve. I don’t think you can hold him back,” Monty says.

The first-year welding student at University College of the North in the Pas, Manitoba, received the award in June.

Three silver medals are awarded annually at the post-secondary institute to students who demonstrate proficiency in trade, diploma and certificate programs.

River recently competed against third-year welding students at the annual Skills Manitoba Competition and placed fourth, beating out a couple of dozen competitors.

River’s current employer has been praising the up-and-comer on his work ethic, skills and positive attitude, Monty says.

But it is River’s success helping young people in his community that might be his most impressive feat. He works with RCMP officers to improve relations between police and area kids, and is also a member of the Junior Chief and Council.

He helps to arrange extracurricular activities like soccer, hockey, baseball and martial arts to keep teens away from gangs and drugs. It’s not always easy to convince them to get involved.

“We have a lot of programming going on. I guess the kids don’t hear about it or just don’t want to go so that’s why we go talk to them personally, make friends with them and ask them to come along. We offer encouragement,” River says.

He also reacquaints the Indigenous youth with their ancestors’ culture, organizing an annual camping trip with elders where they can learn how to cook bison, experience pipe ceremonies, and play traditional games.

“I don’t like seeing young children walking around, acting the way they do, dressed the way they are, and they don’t know their real culture and they like to down it because others down it to them,” River says. “We want them to feel good about their culture and traditions.”

He also wants them to feel good about themselves. River is organizing an upcoming suicide prevention walk in an attempt to reduce the suicide rate among teens on his reserve. He has lost two friends to suicide—ages 15 and 17—in as many years.

“We want kids to grow up making the right choices,” says River.

He plans on earning his Red Seal certification in welding and owning his own company. Monty says he wouldn’t be surprised if River one day became a strong Indigenous leader in the world of politics.

“For somebody of that age to have that type of concern for the youth in his community is pretty awesome. He is a really good role model,” says Monty. “His future is wide open.”

If you have a Career Trek story and you’d like to share it with us, please get in touch with Kyle Mason at [email protected].