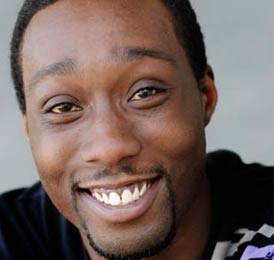 ‘The next step in his Career Trek’

Long-time team member Chris Tekpetey can sum up his experience with Career Trek in one, weighty word: transforming.

“In many ways, Career Trek has been a catalyst for who I’ve become,” says Chris, who credits the organization with helping him grow not only professionally but as a person.

He left in May to start his own business.

When Chris joined Career Trek as a group leader in 2002 at age 21, he had no idea it would turn into such a big part of his life. “It just began as a part-time job to get a couple of extra bucks in my pocket. But the people were so amazing that I came back every year.”

He eventually secured a full-time position and during the last decade took on a number of roles, including his most recent as Phase II project manager.

His co-workers will miss his drive and physical bursts of enthusiasm. Chris was also a favorite among trekkers, who would often describe him as “super cool” in their program evaluation forms.

It was early on that Chris understood the level of impact you can have on kids through the program. He recalls walking along River Avenue when out of nowhere someone called out to him.

“I heard somebody calling, saying ‘Hey! Hey!’ Everybody who was walking looked away, so I casually looked back over my shoulder and it was a man and woman in their pickup truck, screaming out of the window: ‘Hey, aren’t you from Career Trek? My daughter loved you guys! Great work!’ That passion that came out of the parents, it was just amazing. I was only 21 at the time and it just blew my mind.”

Chris says he will definitely instill in his own kids the lessons he learned at Career Trek about positivity and believing in one’s potential. “I was so blessed to have that opportunity,” he notes.

“Thank you Chris, and good luck with the next step in your Career Trek,” says the organization’s founder Darrell Cole.

Chris said he’s excited about his new opportunities but leaving Career Trek felt like saying goodbye to part of his family.

“It really is a family. It’s growing but still has a sense of family. I hope that never leaves.”